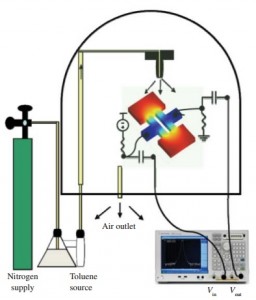 In this project we use micromechanical resonant sensors for detection of concentrations of flammable organic vapors in the environment. Fully silicon thermally actuated resonators with piezoresistive readout are being utilized to detect presence of organic vapor such as gasoline in air. These sensors could have numerous applications in oil and gas industry among others. Examples of such applications include rapid estimation of oil content of oil sand samples and early detection of hazardous leaks.

We have initially been using a thin polymer coating as the absorbent material and frequency shifts in the order of 0.02% (equivalent to ~10nm absorbed gasoline thickness) have been measured for the resonators.

In the meantime we are focusing on achieving orders of magnitude higher mass sensitivities by reducing the resonator thickness as well as using more suitable absorbent polymer coatings. We are also looking into the prospect of using porous coatings which could significantly improve the sensitivity. 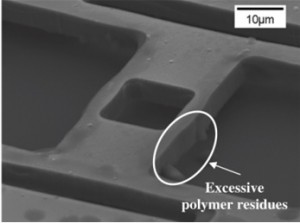